I am sitting here at my computer listening to the rain. The sound of thunder from a storm that just passed is fading off towards the east. I can also hear a new storm approaching from the west. In my heart I feel incredibly grateful. This past winter was the warmest and driest winter that I can remember. The temperature was above freezing during the day most of the winter and we had virtually no snow or precipitation of any kind. March and the first half of April were very warm for this region. Consequently, when I was walking in the woods in late April, the level of dryness was more like early to mid July.

Fortunately, it did cool down for a few weeks and we got some rain from mid April to mid May. But it wasn't enough. The level of moisture in the soil and in wetlands and rivers was already at a deficit because of the lack of snow melt. I was up at Lake Superior in May. I have never seen the water level so low. Not even in mid summer! In June the water level of Georgian Bay (Lake Huron) was also as low as I can remember except once a number of years ago in July after we had experienced a few dry years in a row.

The region where I live has been experiencing a fairly bad drought. Thankfully, it hasn't been nearly as bad as what they are experiencing in the central States and my heart goes out to all of the plant, animal and human people who live there. It seems to be part of human nature that we tend to take the many blessings of life for granted. We love to complain about the rain when it happens at an inconvenient time. But when we really need it, at least some people take notice. Farmers notice. On the other hand, some city folk are too self-absorbed in their artificial world. Maybe they get a bit annoyed at having to water their lawn more often.

Last week we finally got some relief. For about a day and a half we had pretty steady soaking rain. Later in the week we had a decent amount for another evening. Needless to say I was very happy, and so were all of the plants and animals that live around here. Today, since early afternoon, we have been getting a fair amount of rain again. The meteorologists are predicting it will continue well into the evening. I haven't had much faith in them for many years. Our weather patterns have become too changeable and unpredictable in the last few decades. I don't trust their weather predictions more than a few hours in advance. Since mid June they have predicted about 20 days of rain (40-60% chance) for this immediate area. We got a little bit of rain on one of them. That is, until last week and today. All I can say is I am very thankful to hear the voices of the Weather Beings echoing through the sky right now. Any amount of rain that they leave us will be greatly appreciated. 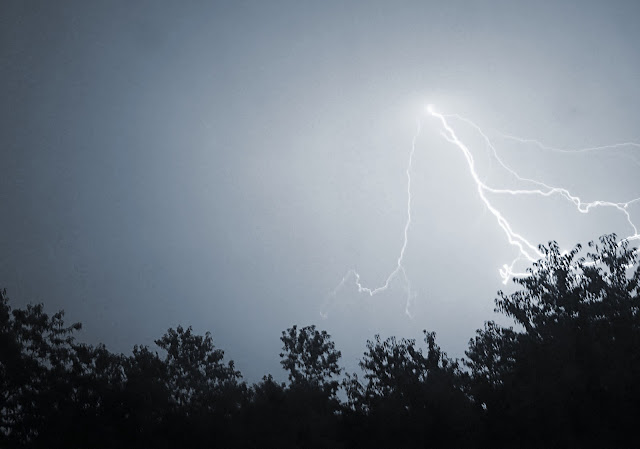 The view of a storm from my bedroom window very early in the morning on July 27th.

As an herbalist, I have always been very in tune with the cycles of nature and how they affect the plants and ecosystem where I live. The weather we have been having has a profound affect on the world around us. There are many things that are different this year. There are a lot more butterflies, but less flies, bees and wasps. It was so warm in March and early April that many trees bloomed much earlier than normal. Insects also emerged early. Then in April there were a couple of weeks where the temperature was below normal and there were some bad frosts that killed a lot of the flowers and pollinating insects. The trees and shrubs that managed to get through it and produce a decent amount of fruit then had to deal with the drought. We got some rain in April and May, but there was almost none in June and July and it was consistently hotter than normal. Many plants that produce fleshy fruits allowed them to dry up before they matured. They couldn't spare the water necessary for their fruits to develop. Where I live, the hawthorns (Crataegus spp.) actually produced a lot of fruit initially, but they dried up in early July and the few that continued to mature were affected by some kind of fungus.

During hot dry years, many plants accelerate their life cycle. They try to flower and produce seed before it gets so dry that they die or are forced to die back to preserve moisture. This year most of the plants in the areas that I have visited have been two to three weeks ahead of schedule, sometimes more. For example, I harvest wild peppermint (Mentha x piperita) a week or two after it goes into flower. This year it was ready for harvesting last week. In the areas where I harvest peppermint it is usually ready around the second or third week of August. 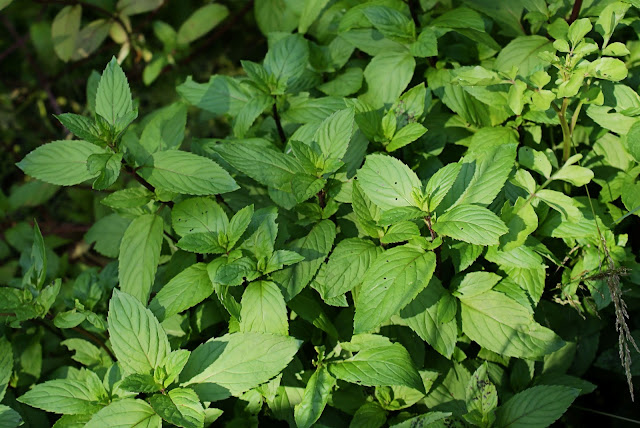 Wild peppermint (Mentha x piperita) on August 5, 2009.
It is still a few weeks away from flowering.

Drought doesn't just speed up the life cycle of plants and reduce production of fleshy fruits. When the soil is too dry, plants lose more moisture through respiration than they can replenish. At that point it is better to allow their aerial parts to die in hope of being able to preserve enough moisture in their roots and rhizomes until the soil is moist again. Unfortunately, if they die back too soon they may not have produced enough of a store of carbohydrates to keep them alive until the following spring. Plants with shallow roots are particularly susceptible. You can see that by looking at people's lawns. Grasses tend to have very shallow roots. Consequently, during a drought they tend to die back first. People accelerate this process by cutting their lawn. It isn't good to cut the lawn during a drought. The soil becomes more exposed to the drying effect of the sun. Taller grasses and other plants also tend to trap moisture and create a cooler micro climate close to the soil. If we do cut the grass, it shouldn't be cut shorter than 10-12 cm (4-5 inches). It is best not to cut it much shorter than that even when it isn't so dry. Nevertheless, most people cut their lawn way too short. During drought conditions, the grass will turn brown pretty quick, but plants with deeper roots like white clover (Trifolium repens), birdsfoot trefoil (Lotus corniculatus) and dandelion (Taraxacum officinale) will stay green much longer. Driving around in the rural areas near where I live last week it was obvious how much of any given lawn was made up of these plants because the grass was brown but they were still green.

Plants in woodland areas are particularly sensitive to drought conditions. Woodland plants generally need rich, moist soils. The shade of the tree canopy tends to keep the soil more moist than in other ecosystems (except wetlands), but prolonged heat and lack of rain will eventually result in dry woodland soils. Once more, plants with shallow roots and rhizomes will tend to die back early. In the woods where I live, many of the shallow rooted species have begun to or have already died back, such as mayapple (Podophyllum peltatum), blue cohosh (Caulophyllum thalictroides) and Virginia waterleaf (Hydrophyllum virginianum). Bloodroot (Sanguinaria canadensis) also has a shallow rhizome, but because it is fleshy and tuberous, it holds more moisture and can resist the dry conditions for a bit longer. However, even the bloodroot is now showing signs of stress. One interesting anomaly is wild ginger (Asarum canadense). It has very shallow rhizomes that mostly sit on the surface of the soil, but it is even more drought resistant than bloodrood. This is because its rhizomes are a bit on the fleshy side; its leaves are very hairy, which helps prevent evaporation during the day and trap moisture at night; and its rhizomes, which mostly rest on the surface, can also take advantage of the dew at night. 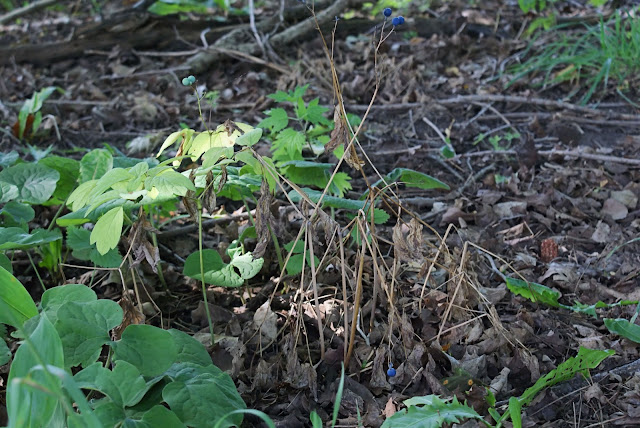 Blue cohosh (Caulophyllum thalictroides) looking more like what it should look like in September or October.
Note the wild ginger (Asarum canadense) in the bottom left corner is still green.

When a plant species shows signs of drought stress we don't want to harvest it. We only harvest from plant populations that are strong and healthy. Many plants can live in a range of conditions, particularly with regard to the amount of sunlight that they receive. For instance, dandelion is particularly versatile. It can live in open woodlands where it gets diffuse light all the way to open fields where it receives direct sunlight 80-100% of the day. What is more common are plants that can live in a slightly narrower range of conditions such as transition areas where they receive as little as 20-30% direct sunlight, as well as in open fields. For these plants, during drier years it is better to harvest them in areas where they receive more shade. During cool, wet summers it is best to harvest them in full sun. It is usually easy to tell which ones are the healthiest during any given set of conditions because they will look it. Similarly, this year it will be better to harvest blue cohosh in low lying moister woodland areas where it isn't showing signs of drought stress and dies back no earlier than mid September.

The rain has now stopped and the sun is streaming through. I hope we get some more rain tonight as predicted. In the mean time, I am very grateful for what we have received.

Posted by Michael Vertolli at 5:30 PM