Happy Solstice ... And Other Stories!

Last Saturday was the winter solstice. Once more we acknowledged this sacred time in ceremony. For those of us who live in the Northern Hemisphere, it is not only the shortest day of the year, the end of fall and the beginning of winter, it is also the end of the natural year and the beginning of the new. It is such an incredible privilege to have been able to live in this awesome, mysterious world through another fall and another year, and to be able to greet the arrival of winter and the new year.

Normally I would post this on the day of the solstice, but this year the wisdom and mystery of this time brought a different teaching in the region where I live and I wasn't able to get online until yesterday. During the last few minutes of our ceremony it started to rain ... and it didn't stop until early Monday morning. Aside from the fact that rain is somewhat unusual in these parts at this time of year (although the winters have been getting warmer and rain more common in the last couple of decades), what was also different was that the temperature stayed steady around the freezing point. For two days the ice accumulated. Starting on Saturday evening, whenever I went outside I would hear a sharp crack and a huge branch would come crashing down about every 30-60 seconds . Every 5-10 minutes a tree would come down as well. I have never seen anything like it. By the end of it even tiny little blades of grass had 2-3 cm (about an inch) of ice on them! 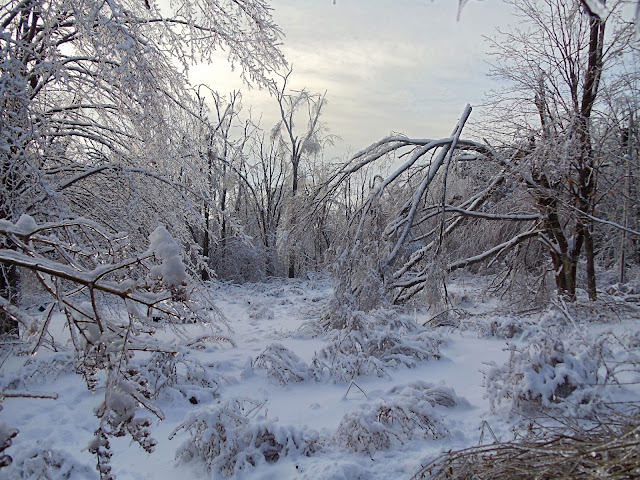 The view from our front door Friday afternoon.

Although they are calling it an "ice storm", it wasn't very stormy. Just very calm with a gentle, steady rain. But by the end of it the devastation was incredible. It is with great sadness that I witness the harm that has come to the tree people where I live and in the surrounding region. The repercussions for our society in the area affected have also been profound. Hundreds of thousands of people were without power and, as I write this a week later, tens of thousands still are - including us! 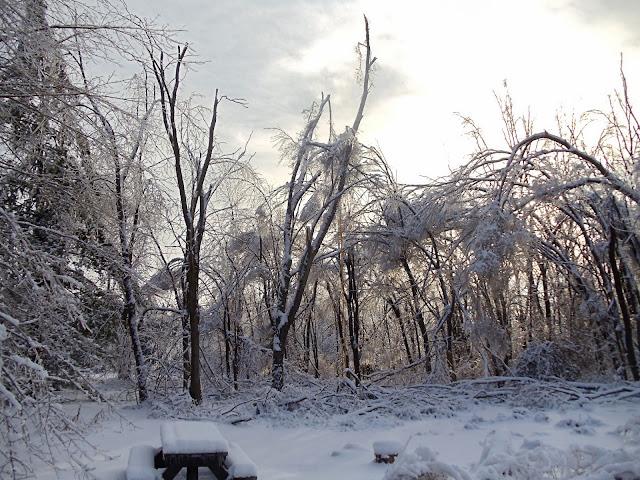 The area a bit to the left of the previous photo.

I live in a rural area. Our driveway winds 300 metres through woods before you get to our house. Our power went out Saturday night when one of the falling trees snapped the power line. The power went out on the street where I live a short time later. The power on our street wasn't restored until Friday afternoon, but we won't get ours until at least the end of next week because that is how long it is going to take to get crews in here to trim the trees and fix the power lines. We had no electricity, heat or water (as we have a well) initially, but luckily my son Sean, who is an electrician apprentice, was able to find us a generator online (they are completely sold out or rented out within a couple of hours drive of the areas affected). The generator that we were able to get isn't a very powerful one. All we have hooked up is the furnace and the lights and plugs in two rooms. Just in time too! By the time he got it hooked up on Wednesday morning it was a couple of degrees above freezing in our house. The whole situation was exacerbated by the fact that on Tuesday we went into a deep freeze while about half of the people affected still didn't have their electricity restored. 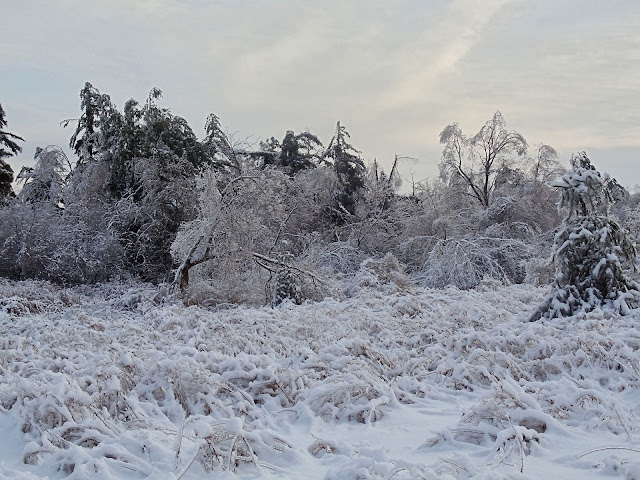 The view behind our home. As a reference point, the large white pines in the background are about 20-25 metres tall.

In spite of the destruction, when we walked through the fields after the storm everything looked so magical coated in thick ice and glistening in the sunshine. I couldn't take any photos at that time because the batteries were dead in both of my cameras. I wasn't able to charge them until Thursday. The photos I have provided were taken Friday afternoon. By that time some of the ice had melted and everything was covered by a fresh blanket of snow that fell on Thursday.

As devastating as these natural disasters are, they are part of the natural cycle of things. They provide a means of transformation and renewal. Traditional peoples understood this. However, in our modern society we are over-populated and we attempt to build permanent homes and infrastructure. We have created a situation where we are usually at odds with natural rhythms and cycles in order to maintain our lifestyle. We also tend to think too short-term and don't have very much resilience or adaptability built into how we do things. We tend to put most of our eggs in one basket (like petroleum). 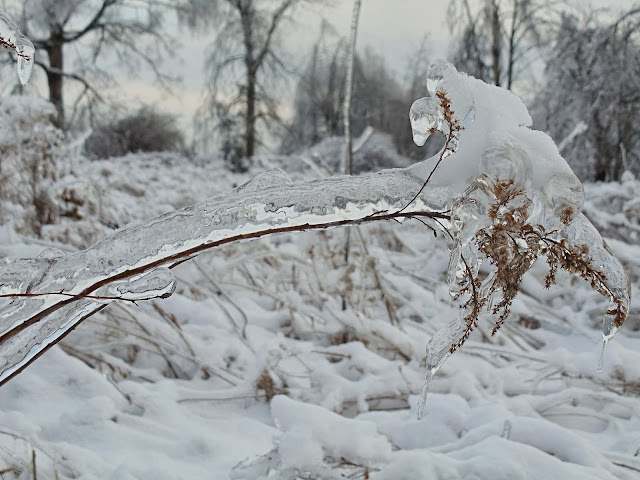 Living through this has provided me with some very powerful teachings. We currently live in a home that I rent in a rural area just north of Toronto. It's a moderate size home by today's standards (probably about 3,000 square feet). My kids each have a bedroom plus I run classes and clinics out of our home. One room is a designated classroom and I also have a consultation room and my working office. Nevertheless, I feel the weight of having to have so much space and stuff. A short distance south of me there are endless new subdivisions where even the townhouses are 1,500-2,000 square feet. Semis are 2,000-2,500 and detached homes can be anywhere from 3-6,000 square feet. Then there are the luxury "communities" which are completely over the top. There is even one subdivision a short distance west of me where the "homes" are 8-15,000 square feet. Personally I think that this is insane! I grew up in an older suburb of Toronto where most families did just fine in 1,000-1,500 square feet bungalows which only took up a small portion of their lots. There was lots of green space, kids played outside most of the time, and everyone knew their neighbors. This storm was rough for me, but I can't imagine what it would be like in one of those monster homes without electricity. I hope that they learned something from this too!

I look forward to a time in the next year or two when I will move further out into the country to a smaller place that is more manageable along with some close friends. We are part of an intentional community that has been developing over the last few years. We still haven't found the right land, but hope to soon. Although I'm going to be roughing it for a bit longer, I'm extremely grateful for the lessons that I've learned from my current circumstances about important ways to build more flexibility and resilience into my home, and for the importance of community. I would not have been able to manage without the help of family and friends.

As always, as I walk the land I am always observing what's going on. I'm paying careful attention to how the land responds to these conditions. I've learned a lot about the ability of the many species of trees that live on the land where I live to be able to withstand an ice storm. Some species were only affected in a minor way. Others were devastated. Since we are expected to experience more of these kinds of weather events in the coming years, this is important information in terms of what trees we decide to plant in the future. I haven't had the opportunity to explore every corner of the land due to falling branches and ice, but this is what I've found so far starting with the species that are the most resilient and working down to those that were the most damaged: Norway spruce (Picea abies) > white spruce (Picea glauca) > eastern hemlock (Tsuga canadensis) > balsam fir (Abies balsamea) > tamarack (Larix laricina) > red pine (Pinus resinosa) > white pine (Pinus strobus) > black walnut (Juglans nigra) > sugar maple (Acer saccharum) > rock elm (Ulmus thomasii) > white cedar (Thuja occidentalis) > ironwood (Ostrya virginiana) > pin cherry (Prunus pensylvanica) > chokecherry (Prunus virginiana) > high-bush cranberry (Viburnum opulus) > common buckthorn (Rhamnus cathartica) > red oak (Quercus rubra) > white ash (Fraxinus americana) > red maple (Acer rubrum) > hawthorn (Crataegus spp.) > American beech (Fagus grandifolia) > American elm (Ulmus americana) > Eastern cottonwood (Populus deltoides) > silver maple (Acer saccharinum) > white willow (Salix alba) > paper birch (Betula papyrifera) > trembling aspen (Populus tremuloides) > blue beech (Carpinus caroliniana) > yellow birch (Betula alleghaniensis) > American basswood (Tilia americana) > black cherry (Prunus serotina) > peachleaf willow (Salix amygdaloides) > Manitoba maple (Acer negundo) > Siberian elm (Ulmus pumila). Of course, this is only the result from one storm with no wind, and many of the trees around me are relatively young to medium age. Other storms might produce slightly different results, but this is still very useful information. 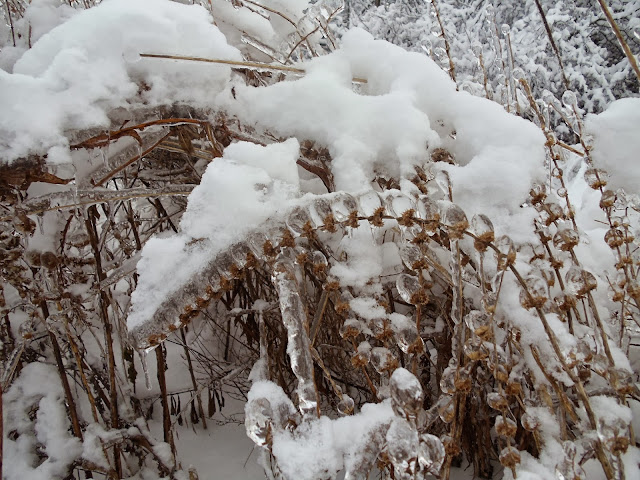 Here we have motherwort (Leonurus cardiaca) similarly encased in ice.

There is also the much bigger picture. Due to global warming, the area where I live is expected to get more ice storms, more violent thunder storms, more tornadoes, and more extremes of weather in other ways such as years of drought and years of excessive rain (last year Toronto experienced its heaviest rainfall and worst flooding on record). This is going to be the new norm, not just here, but pretty much everywhere. As much as we may empathize with other people when we hear about various natural disasters in the news, it's not the same as when it happens in our own backyard. By now most of us have experienced natural disasters first hand, or at least have family or friends that have. It is my hope that this and other similar occurrences will help us all to wake up and realize that the way we are living is unsustainable. If we don't act on a major scale very soon, the world that our children and grandchildren inherit is going to be a very different and challenging place.

Getting back to the solstice, I would like to send out prayers of healing at this sacred time to all of the people of the world. I hope that this will be a year of greater healing and wisdom; that we will begin to open our hearts more fully and tread the long and difficult path necessary to help create a more balanced, harmonious and sustainable future.

Posted by Michael Vertolli at 9:19 PM