Although I primarily use plant species in my practice, I also use several medicinal fungi. The first group of medicinal fungi that I started using about 15 years ago were several of the Ganoderma species. These are bracket fungi or conks that grow on wood. Of the various members of this genus, by far the most popular is lacquered polypore (G. lucidum), better known by its Japanese name reishi. This species grows on a number of different hardwood trees. Although it is circumboreal, growing throughout the temperate regions of the northern hemisphere, it is rare in the region where I live. As a result, I primarily use artist's conk (G. applanatum) and hemlock varnish shelf (G. tsugae), which are quite common in this area. All three species have similar properties. 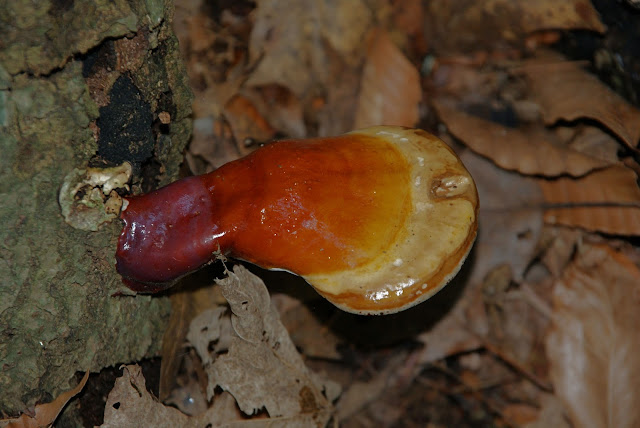 I came across this lacquered polypore (Ganoderma lucidum) in mid June this year growing from the base of a
beech tree (Fagus grandifolia). It is one of the few times I have seen it growing in the region where I live.

I have used all three of these Ganoderma species. Lacquered polypore is not common where I live, however, one year I purchased a log that was inoculated with the spores of this species and grew it so that could make a tincture of the fresh fruiting body and compare the properties of all three species. Although it is not as well know as reishi, I actually have a slight preference for artist's conk. However, in my practice I usually use a 50/50 mixture of the tinctures of the fresh fruiting body of artist's conk and hemlock varnish shelf. I sometimes mix closely related species that have similar constituents and properties to increase the diversity of chemical constituents in the medicines that I use. I find that closely related species are often mutually synergistic and the properties of these combinations are sometimes more consistent and versatile than using the individual species. 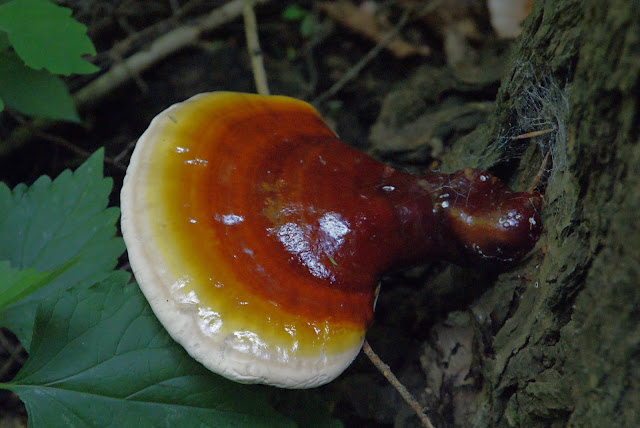 Hemlock varnish shelf (Ganoderma tsugae) often looks very similar to lacquered polypore, but it grows almost
exclusively on hemlock (Tsuga spp.). The margin is whiter compared to the photo of
lacquered polypore (see above) because this one is still growing.

Artist's conk is one of the most adaptive fungi in terms of the variety of tree species that it can grow on. It primarily grows on hardwoods, but on rare occasions I have seen it growing on conifers as well. That being said, in the region where I live it most commonly grows on sugar maple (Acer saccharum) and American beech (Fagus grandifolia).

Unlike its relatives, the fruiting body of artist's conk is perennial. If the conditions are right it can grow for many years. It is brownish with a woody appearance on top, but the underside is white and somewhat rubbery. If we draw on the underside with some kind of stylus, it leaves distinctive lines that will be preserved if the fungus is dried. This is how it got its common name. I have seen some pretty amazing pictures that were drawn on artist's conk!

Artist's conk used to be one of the most common fungi in southern Ontario. However, in the last few years it has become less common. As a result, I have found it a little more difficult to find good harvestable specimens. I suspect it has something to do with the average age of the forests in our region. From 1980 to 2005 there were a lot of very old beech and maple trees that gradually died off. There aren't that many of the oldest ones left in a lot of the forests that I frequent. This is just my hypothesis. There are probably other reasons as well. 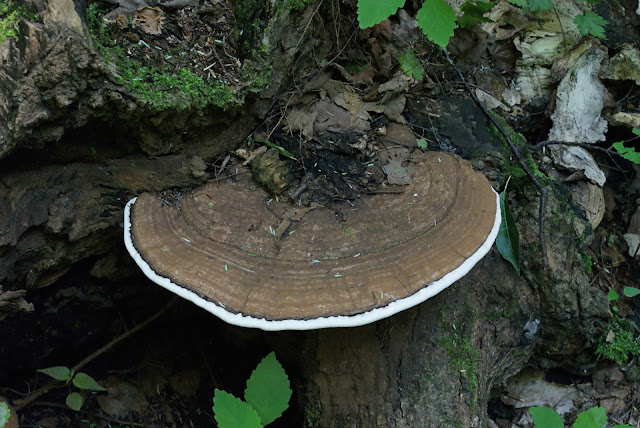 The fruiting body of artist's conk (Ganoderma applanatum) is perennial and can grow for many years.

I use a moderate amount of Ganoderma tincture in my practice. Typically about 4-6 litres per year. Since I mix artist's conk and hemlock varnish shelf, that means I need about 2-3 litres of each species per year. The fruiting bodies of these species are pretty heavy. If I can find a decent supply I will usually harvest enough for two years so that I don't have to harvest it every year. However, this year I couldn't find much good quality artist's conk. I had one litre of the Ganoderma mixture pressed and another litre of this species on hand macerating. I was able to find just enough to make another two litres. Fortunately, I only needed to find one good sized conk to make this amount.

The fruiting of many fungi species is variable. It is particularly influenced by the amount of available moisture. In some years certain fungi may not fruit at all if there isn't enough rain. For instance, a couple of years ago it was very dry in Southern Ontario and the artist's conk, hemlock varnish shelf and birch polypore (Piptoporus betulinus) in the woods around my home didn't fruit at all. But the birch polypore, which typically fruits in August or September, finally did fruit during a thaw in mid January! 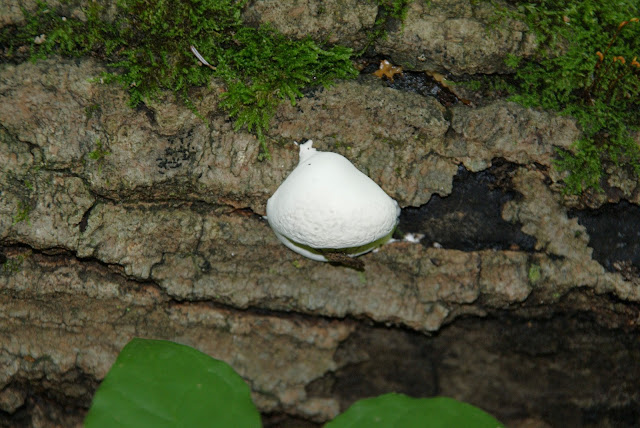 A new fruiting of artist's conk (with a friend hiding beneath!).

The new growth along the margin of a fruiting body looks white and rubbery, similar to the appearance of the underside. As it reaches the limits of its new growth it transforms into its typical woody appearance as the white band along the edge gets increasingly narrower until it finally disappears. The spores are released from pores in the underside, which is why it is called a polypore. Apparently the top and underside of the fruiting body have an opposite electrical charge. As a result, some of the spores when they are released are attracted to the top of the fungus. During the peak of its fertile period there is often a deposit of the brownish dusty spores on top of artist's conk. 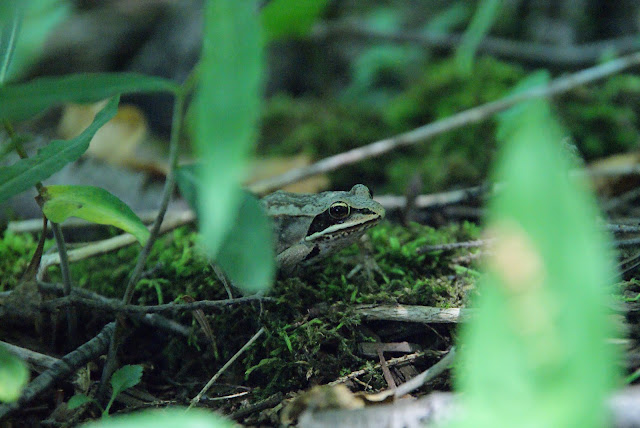 Another friend: This wood frog (Rana sylvatica) was nearby watching the strange dude photographing fungi!

There is a brief overlap between the period of active growth and the fertile period when spores are produced. This is when I prefer to harvest it. At that point there will still be a very narrow white growth band along the rim, but there will already be a light dusting of spores on top unless it has been fairly breezy. Since the growth of this species is so variable, the point where it is at this stage can be anywhere from mid June to early August in southern and central Ontario. This year I harvested artist's conk on July 12th. It was a bit more mature than when I usually harvest it. The first week of July would have been ideal.

I have found that it is best to only harvest the part of the conk that grew during the current year and the previous year or two. The portion that grew each year can be easily determined by the distinctive growth bands on the upper surface. When it is harvested this way it will continue to grow in the following years. 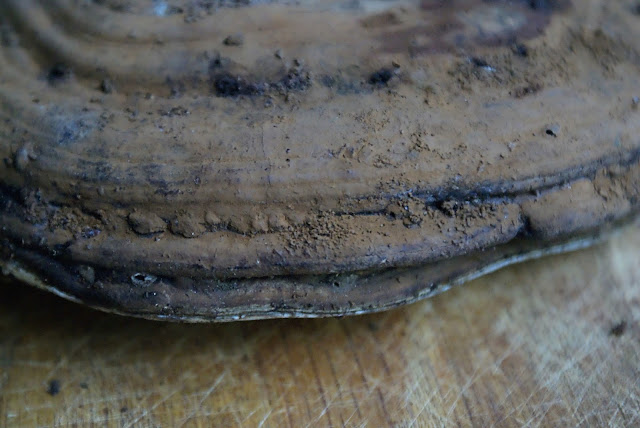 Sometimes artist's conk grows more vertically and the growth bands are layered on top of each other.
On this one the dusting of spores is visible on the upper surface. 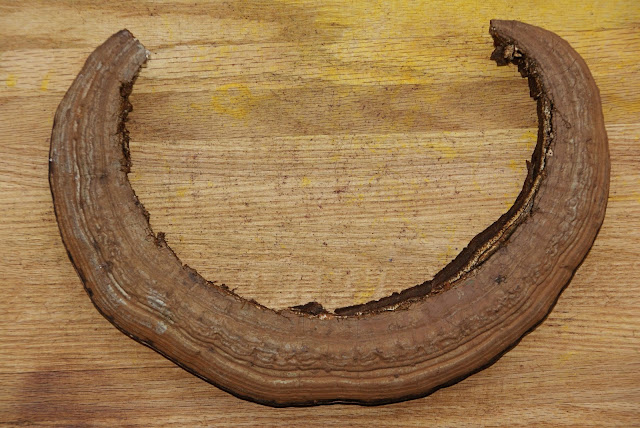 The harvested portion of artist's conk. The yellow stain on the cutting board was from processing
fresh organic turmeric rhizome (Curcuma longa) a few weeks previously. 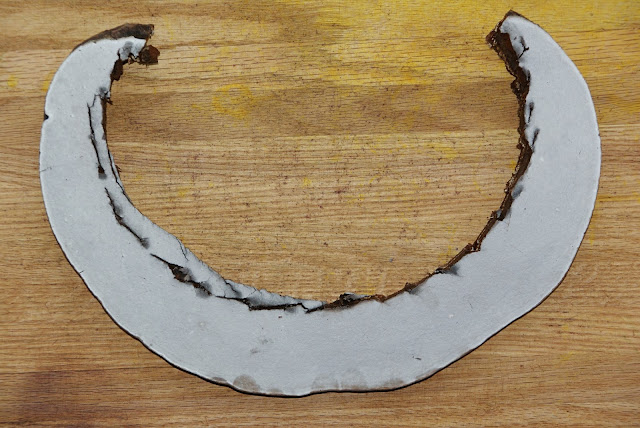 The underside of the same piece. The discoloration on the lower part is bruising caused
by my fingers when I was holding it while cutting it with my knife.

When we harvest the previous three years of growth, there will often be a portion of the upper surface from two years prior to the year it is harvested that is old and dying. This oldest layer is removed. This is best done with a good heavy-bladed knife like a cleaver or sometimes a serrated knife will work well. 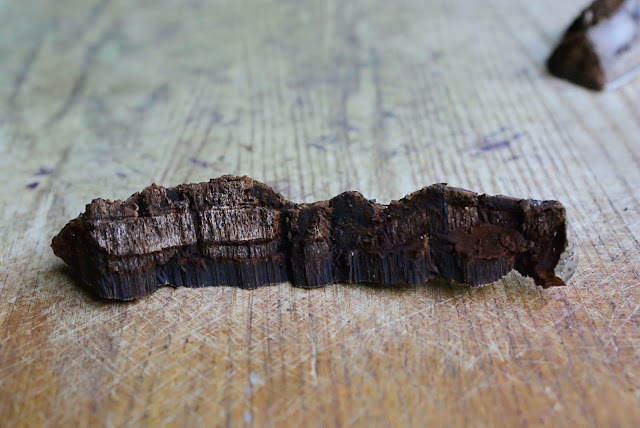 You can see the distinctive growth bands layered vertically in this cross-section.
The upper layer that has lots of white in it is too old and must be removed. 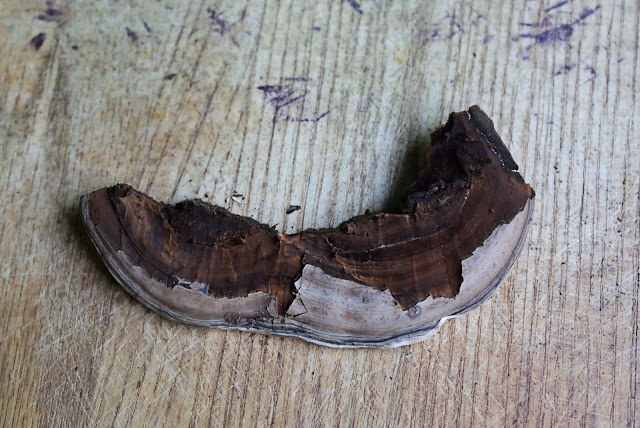 Here's the same piece from above after the older tissue was removed.

Once the older tissue is removed, there are two stages in processing artist's conk to prepare it for making a maceration. It is not possible to immediately start chopping it with a mezzaluna  because the fruiting body has a dense but somewhat rubbery quality. It gives too much to be cut in this way. It is necessary to slice it up into smaller pieces first. The same kind of knife we used to remove the older tissue will work well for this. 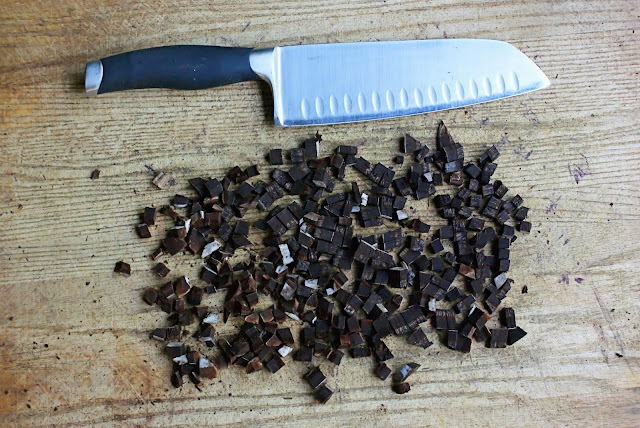 Artist's conk after the initial cutting.

Once the pieces are small enough, they can be chopped finer with the mezzaluna. This is much quicker than doing it with the cleaver. 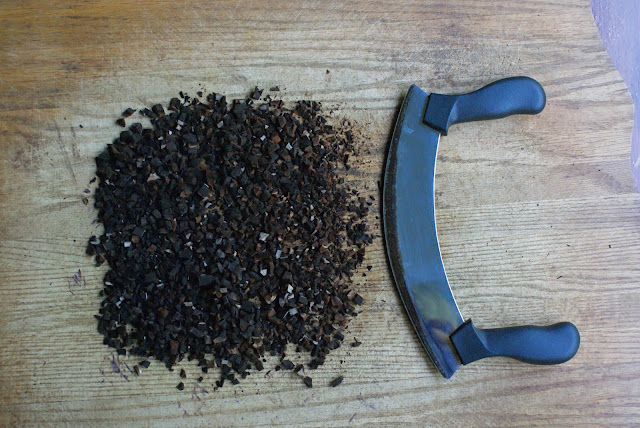 Here it is again after the final chopping.

Some fungi absorb a lot of water. This needs to be considered in terms of how we prepare a tincture because the water content will dilute the constituents in the tincture. Because of this I will step up the potency of these fungi one level. Whereas I primarily recommend preparing a 1:5 maceration (1 part herb to 5 parts menstruum) for fresh herbs, for really wet fungi I will prepare a 1:4 maceration. However, this will further increase the amount of water in the tincture. In order to compensate for this I need to adjust the menstruum as well. For dried herbs I usually use a menstruum consisting of 60% water, 30% alcohol and 10% glycerin. For fresh herbs I increase the concentration of the alcohol and glycerin slightly to compensate for their water content. The ratio I use is 56% water, 33% alcohol and 11% glycerin. Since I primarily use fresh herbs, it is the latter mentruum that I use most of the time. However, with really moist fungi I adjust it further to 52% water, 36% alcohol and 12% glycerin. Hemlock varnish shelf and birch polypore fall into this category, but there are other fungi, such as clinker polypore (Inonotus obliquus), better know as chaga, that are no more moist than the average herb. In the latter case no adjustment of the potency or menstruum is necessary. Artist's conk tends to fall into the middle. If there has been a lot of rain it can be fairly moist, however, sometimes it isn't. Each time I make it I have to decide whether or not it is necessary to compensate for the moisture level.

I have covered the specifics of making a maceration of a fungus like artist's conk. For other more general details on the process of making a tincture, see the Making Medicine series of posts.

Many medicinal fungi are moderately to significantly adaptogenic. Although every adaptogenic herb has some specific areas of use, adaptogens also work as general tonics and tend to have benefits for our whole body. However, I have found that for people suffering from chronic health conditions, in order to get the most out of using adaptogens it is best if they are used in the final stages of treatment where they have both specific and generalized actions and help to coordinate the functioning of the different systems of our body. They can also be used as general tonics by people who are relatively healthy.

That's all I'm going to say about the properties of artist's conk. In the Herbal Resources section of my website I have provided a pdf document that you can download that is based on my research and experience with this herb.

Posted by Michael Vertolli at 8:18 AM 8 comments: