On June 12th I went to one of the areas where I wild-harvest herbs and harvested ground ivy (Glechoma hederacea), better know as creeping Charlie in some areas. This Eurasian species has naturalize throughout much of North America. Some people consider it invasive, especially in shady areas, but it really isn't. It can sometimes be prolific, but it doesn't crowd out other species. It often grows on shadier parts of lawns. If you notice a somewhat minty smell when you are mowing the lawn, you've probable mowed some ground ivy!

This is an herb that I use in moderate quantities in my practice - typically about 4-5 litres per year. It is a very versatile herb and I would probably use even more of it if it wasn't for the fact that it is a difficult herb to harvest in quantity due to its small size. As I still had 2 litres of ground ivy macerating and a bit more already pressed, this year I harvested 5 litres. With herbs that I use in small to moderate quantities I usually harvest a two year supply so that I only have to harvest about half of them each year, but because of difficulty harvesting large quantities of this herb it is necessary for me to harvest it annually. 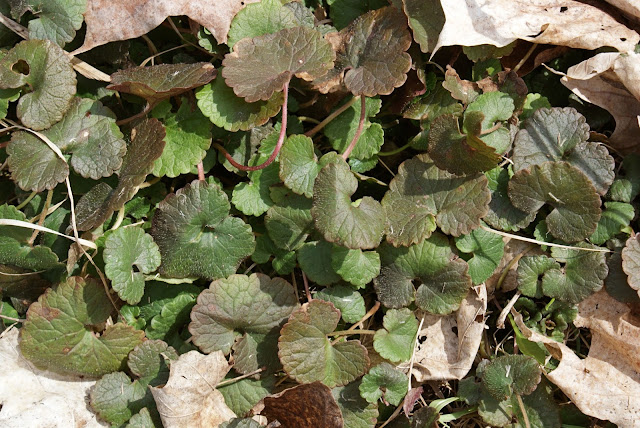 Ground ivy (Glechoma hederacea) in the early spring before it starts to produce flowering stalks.
The larger, older looking leaves are the ones that have over-wintered.

Ground ivy is fairly sensitive to variations in weather conditions from year to year. In the region where I live it can go into flower any time from mid April to early May. It has a relatively long flowering period, typically flowering until late June or early July.

Although we tend to harvest the aerial parts of most herbs very soon after they go into flower, with ground ivy it is preferable to wait until a bit after the middle of its flowering period. This is because the flowering stalks that we harvest are relatively small and don't weigh very much. It is best to wait until they are almost at their maximum height. I usually harvest it from early to mid June, depending on the weather conditions in any given year. 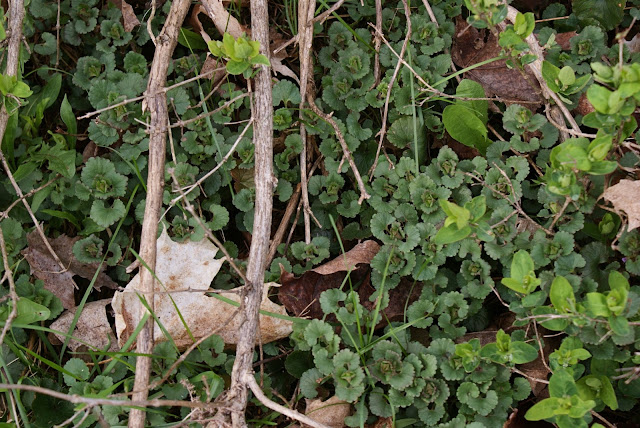 The young stalks of ground ivy just before it begins to flower.

Fortunately ground ivy has a fairly long period when it can be harvested - typically about two weeks - because, with the unusually cool, wet weather we have been having, there haven't been very many days when the conditions are ideal for harvesting herbs. As a result, I didn't get a few of the herbs that I intended to harvest; but I had to get ground ivy because I use a fair amount of it. 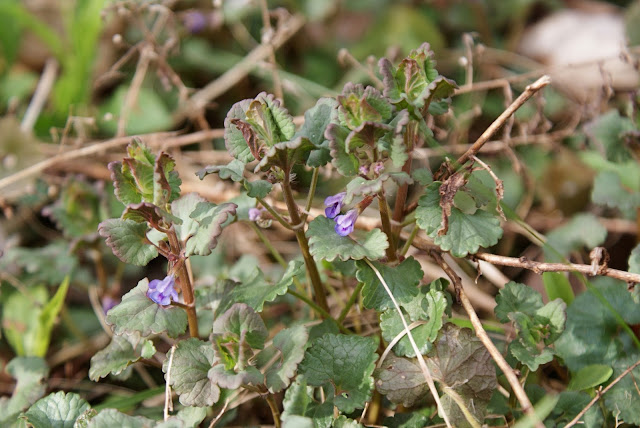 This is what ground ivy looks like when it first goes into flower. 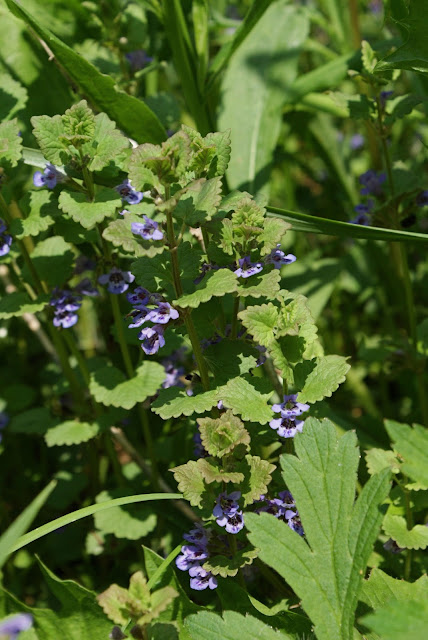 This year on June 12th I headed out to a wilderness area about 15 minutes from where I live to harvest ground ivy. As always, I began by offering tobacco to the spirits of the land and the medicine and asking permission to harvest the medicine that day. After I received permission I headed to an area where the spirit of ground ivy is very strong and there is a large healthy population. 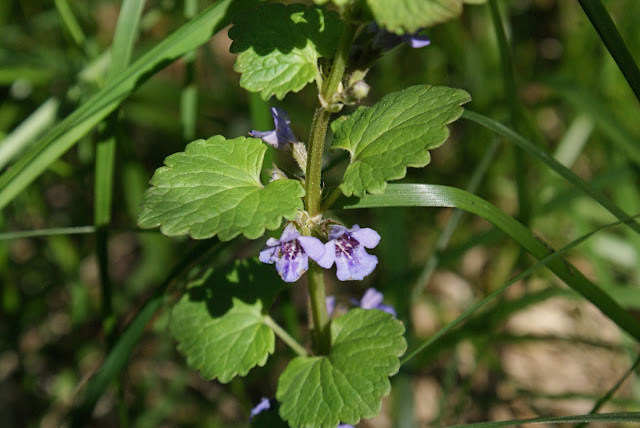 A closer look at our friend. Notice that it has square stalks and opposite leaves, typical of the Mint family.

Although for the most part our spring was cool and wet, we did have a few short periods when it was sunny, hot and humid. The day I harvested ground ivy was during one of those periods. It was very hot that day and I had to be careful not to drip sweat onto the herbs as I harvested them. It was also the first day when the mosquito people were quite present. I rarely use mosquito repellent and only use a natural formulation that I make when I do. However, I never use repellent when I am harvesting herbs. Partly it is to ensure that the essential oils in the repellent I use don't contaminate the herb(s) that I am harvesting. But it is also another way that I give back to the land where I am harvesting. I never intentionally kill biting insects and when I am harvesting I just let them bite me. Eventually my blood will work its way up the food chain, into the soil, and even the plants that live there. The the sacrifice of the plant people when they offer the gift of their medicines is far greater than the little bit of blood that the mosquitoes take from me. In fact, I have a good relationship with the mosquito people and they bite me a lot less than they bite other people. When I'm with other people they hardly bite me at all, unfortunately for the others! When I used to have a more antagonistic attitude towards them they used to bite me as much as anyone else.

The flowering stalks of ground ivy can grow up to 50-60 cm (20-24 inches) tall, but it is best to harvest them when they are about 30-40 cm (12-16 inches) tall. We harvest about the terminal 50% of the stalk. In order to ensure that I do not have too much of an impact on the local population of this herb, I only harvest about from about a third of the stalks in any given area. 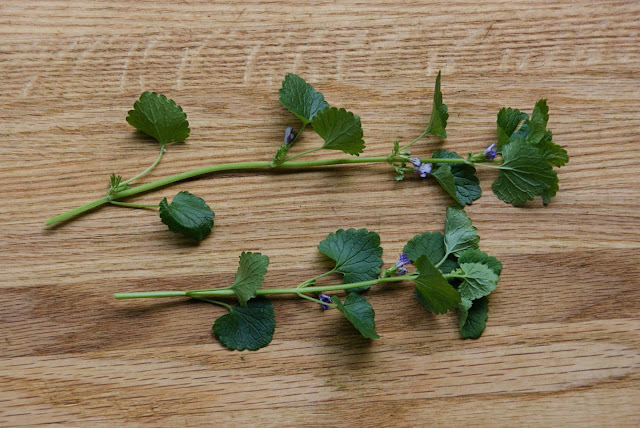 The harvested portion of two different size flowering stalks. The top one is 20 cm (8 inches) long,
the bottom one is 15 cm (6 inches).

In preparing herbs to make a tincture there are two stages that can be relatively time consuming. The first is the actual harvesting. Plants for which the harvested portion is small or whose population tends to be more spread out take a lot more time. Of course, we have to include the time it takes to travel to and from the area where we are harvesting as well.

The other stage that can be time consuming is the processing that we need to do with the harvested portion before it can be chopped up to prepare a maceration. There are some herbs from which we use the entire harvested portion. However, these are the minority. With the aerial parts of most herbs, much of the stalk is a fair bit less potent than the leaves and flowers. As a result, we usually have to remove a portion of the stalk. The difference in potency between the stalk and the leaves and flowers varies from herb to herb. The greater the difference, the greater the proportion of stalk that has to be removed and the longer the amount of time it takes to process the harvested portion. The more an herb branches, the more time this takes as well. Ground ivy is about medium in this regard. We do need to remove a fair bit of the stalk, but the stalks do not branch. With this herb it is best to remove the leaves and flowers from about the lower 2/3 of the the stalk. That portion of the stalk is removed and not used. I don't waste anything. The discarded stalks end up in my composter. If I didn't have a composter I would return them to the Earth somewhere at my next opportunity. 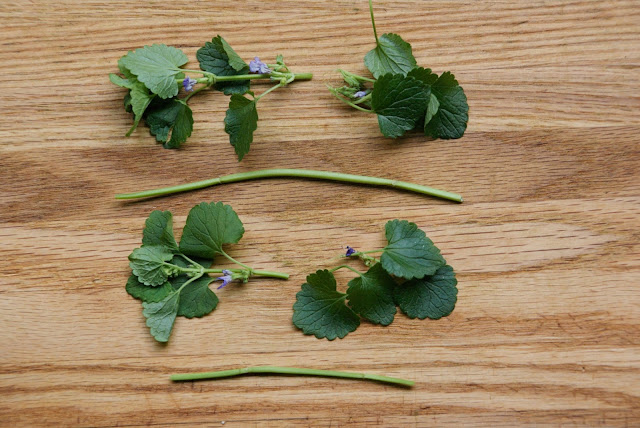 The same two harvested portions showing the amount of stalk that was removed.

Once the stalk that we aren't using is removed, the herb is weighed to determine the appropriate amount we need to use taking into account the potency we wish to prepare and the size of the jar that we will be macerating it in. 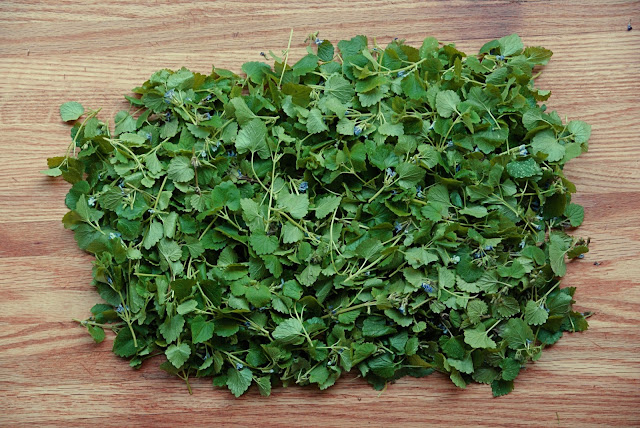 This is the amount of processed herb required to make 1 litre of tincture at a 1:5 potency.

Then we have to chop the herb up relatively fine before it can be macerated. With the right tools, that doesn't take very long. For more information on the specifics of making a tincture, see the Making Medicine series of posts. 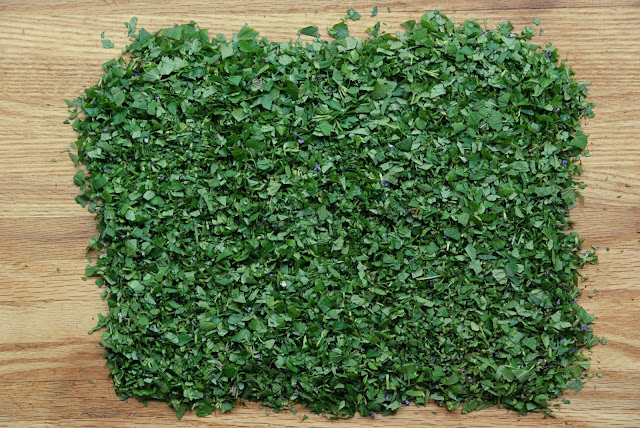 Here it is again, chopped up and ready to macerate.

There is not very much information on ground ivy out there. It is primarily recommended for respiratory conditions and inflammation and ulcers of the digestive tract. In my experience, I have found it to be a much more versatile herb than what you might suspect based on the information in the literature. However, this is typical. When I use an herb and really get to know it, I always find that it has many more properties and uses than what is indicated in the literature.

Rather than turn this into a super long post by getting into the uses of ground ivy, in the Herbal Resources section of my website I have provided a pdf document on ground ivy that you can download that is based on my research and experience with this herb.

So, that wraps up my discussion of my experience harvesting my friend and colleague ground ivy. Except for the difference of habitat, the process is very similar to harvesting blue vervain (Verbena hastata), which I described in the Making Medicine series. In future posts I will discuss the harvesting and processing some different medicines that have a range of different requirements.

Posted by Michael Vertolli at 9:13 AM